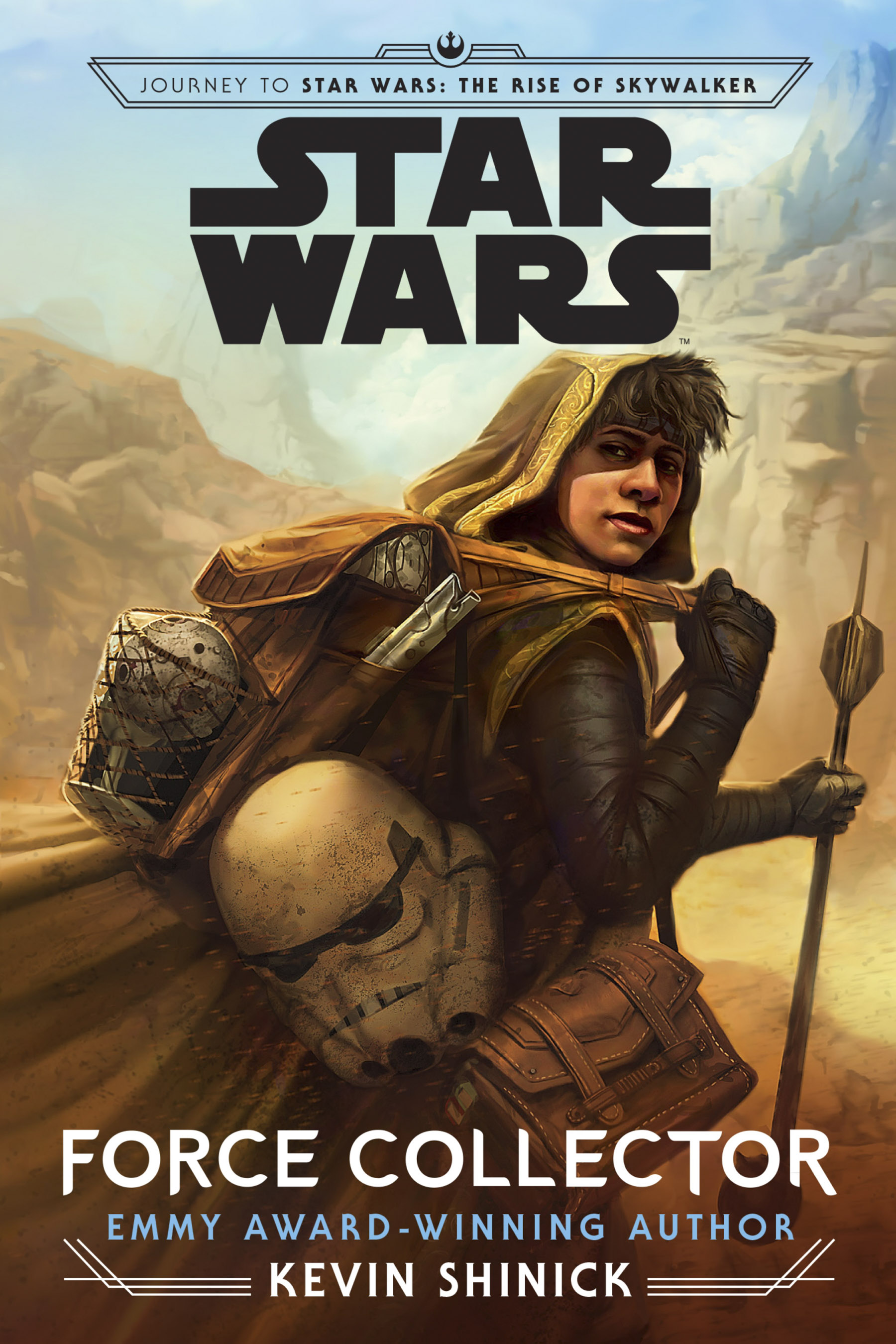 “Now that you’re comfortable holding the light­saber,” he heard someone say, “why don’t we move on to technique?” Something about the voice pinged in Karr’s head. He knew it from somewhere but just couldn’t place it. Karr followed the voice until it led him to a different figure. He couldn’t see that one’s face, either, but the man was wearing a flowing robe. Now that, Karr thought, was definitely a Jedi.

“You’re not going to make me fight you, are you?” said the person waving the lightsaber.

The man in the robe laughed. “No. But we should work on your connection to the Force.”

A nearby golden blur—a droid, maybe?—asked, “May I be of any assistance, Master Kenobi?”

Master Kenobi? Karr did a mental double take. No wonder the voice sounded familiar. It was the same Jedi he had seen in his earlier vision.

Kenobi responded, “No, Threepio. Young Skywalker here must do this on his own.”

Skywalker, too! This was too much of a coincidence. They must have been two very important Jedi to come up twice in his visions. And to think they once stood on the very spot Karr was standing. Although much earlier, he imagined, since Kenobi seemed to be train­ing Skywalker and he had not yet become the General Skywalker of the Clone Wars vision.

Karr watched as Kenobi crossed to something that had caught his eye. He pulled from a compartment the very orb Karr was holding. For a moment, Karr felt he was sharing something with the Jedi Master. Not just the vision. Not just a lesson. But a connection.

“Try and defend yourself against this,” Kenobi suggested.

“The bigger question is, What if you can? Besides, it’s a training remote. It is equipped with nonlethal blasters specifically for those who wish to practice. I’m guessing our pilot handles that blaster better than we imagine.”

“Unless this belongs to the Wookiee,” Skywalker joked.

Kenobi smiled as he tossed the remote into the air. “Focus.”

Skywalker faced off against the target as it hissed and darted across the room. With each dodge and swing, Karr couldn’t help copying the Jedi in train­ing, almost as if he was waiting his turn.

Until something stopped them both.

Kenobi reached for his chest and looked for a place to sit down. Skywalker retracted the lightsaber.

“Are you all right? What’s wrong?”

“I felt a great disturbance in the Force. As if mil­lions of voices suddenly cried out in terror and were suddenly silenced.”

Then, just like those voices, Karr’s vision was silenced.

When his eyes were working correctly again, he saw that RZ-7 must’ve gotten a few more lights on. The room was brighter, and tiny rows of secondary indi­cator lights blinked softly on standby. His head was splitting, but he didn’t care—not at all. He grinned from ear to ear.

Maize stood above him. She smirked and put one hand on her hip. “You look pretty happy for a guy who just fell and hit his head.”

“On the seat,” she said, cocking her head toward the bench.

“Worse than my reaction at Sconto’s, but definitely worth it,” Karr said.

“If you say so,” Maize said skeptically. Satisfied that he wasn’t going to die or anything, Maize slid onto the bench seat and put her feet up on the rounded table between them. It was bolted to the floor. Her boot heels scraped the top, but it didn’t wobble.

“The first time I fainted, I was out for ages. My par­ents thought I was dead.”

RZ-7 backed him up. “You’re on a strong upward trajectory, sir. You’ve emerged from your trance after nine seconds with a smile. This is your most success­ful vision to date! Assuming that your head doesn’t explode within the next hour.”

“I don’t think it’s actually going to explode. It just . . . kind of feels like it.” He rubbed at his temple and tried not to groan.

“Was it worth it? What did you see? Did you get anything new?”

He flung himself onto the seat beside her. “Totally worth it! I got those names again. The same ones as before.”

“Skywalker,” he corrected her with an eye roll. “And Kenobi. But it was earlier.”

She asked, “What do you mean?”

“Skywalker wasn’t any kind of a general in this vision. And he didn’t seem to know much of anything about the Force. He was . . . training. Like me, in a way. Only he had a true mentor. A real Jedi to show him the way.”

Maize could see Karr’s spirits dampening. “Maybe,” she added. “But you know what he didn’t have? A cool friend helping him find what he needs by flying him around the galaxy.”

“And you’ll get there. Just give it time. We’ve really only just started if you think about it.”

Karr realized Maize had a point. If that same strug­gling Skywalker went on to become a Jedi who could pull ships from the sky using only the Force, then maybe there was hope for Karr yet

Journey to The Rise of Skywalker