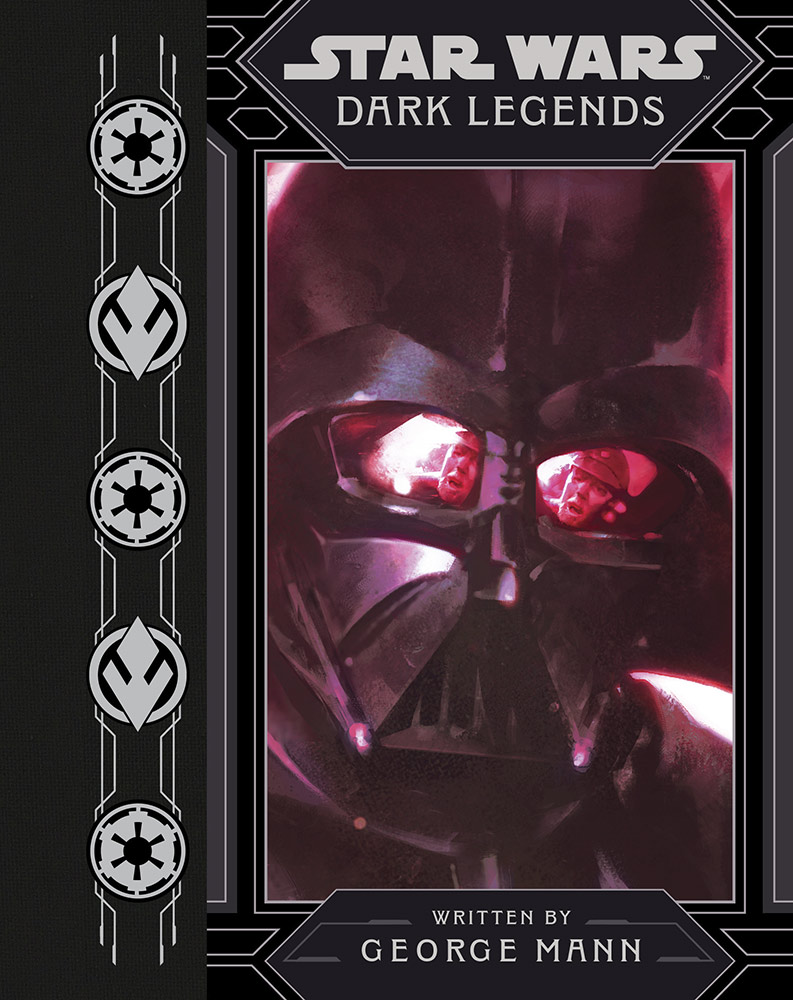 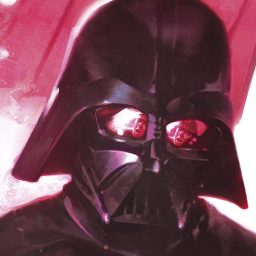 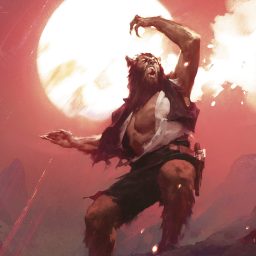 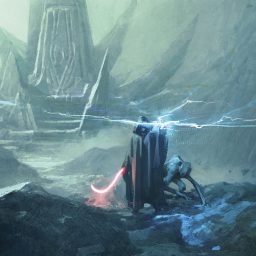 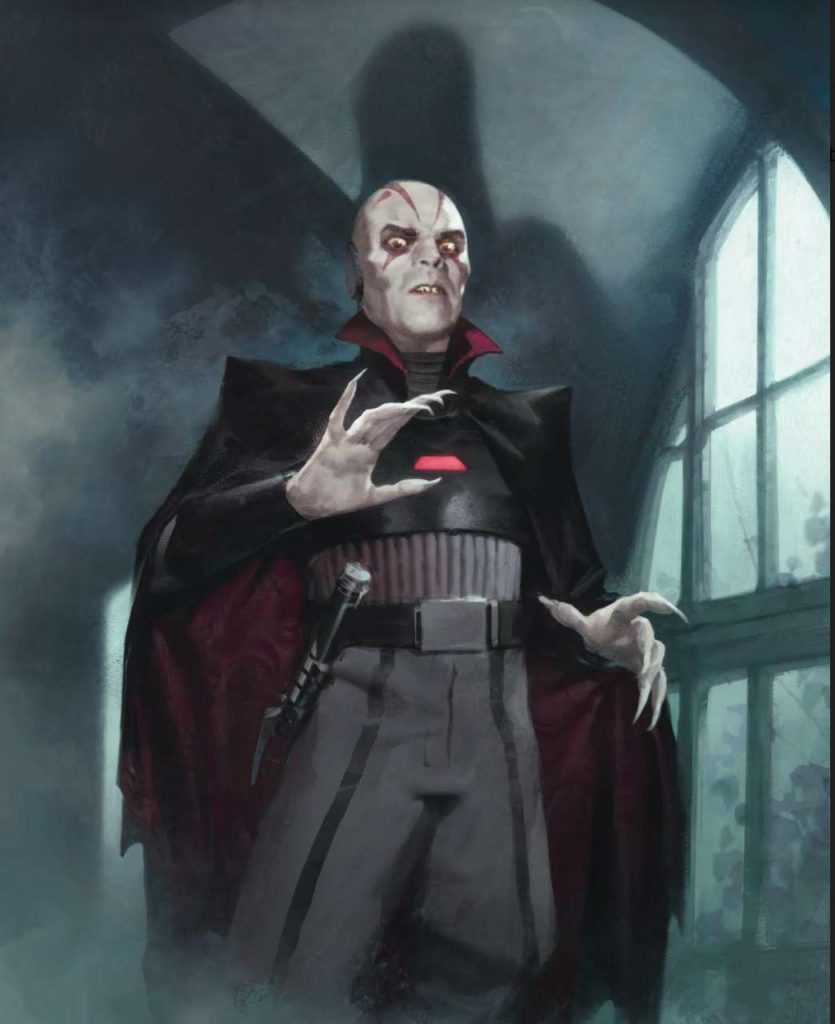 ON THE PLANET Gaaten, nestled amongst the gloomy spires of a once great city, sit the ruins of an orphanage where, long ago, children who had lost their parents during the fallout of the Clone Wars were sent to be cared for while they awaited placement in new homes throughout the sector.

Only, all was not well at the orphanage, for amongst the children there were tales of a dark terror who came in the night: a tall, thin man with sharp teeth and glowing eyes, who from time to time would visit the orphanage to steal away children, scooping them out of their beds and dragging them through the window, their cries muffled and unheard. The children who were taken by this horrifying creature were never heard from again.

These rumors were passed in terrified whispers between the children, muttered beneath bedsheets or behind cupped hands when the lights went out. The stories had, of course, been dismissed by the orphanage staff, and while it was true that some children had gone missing from the orphanage over the years— probably nothing more than runaways, children unhappy with their lot and suffering from the devastating loss of their parents—the rumors were viewed as nothing but the wild imaginings of disturbed youths, an embodiment of their fear and pain. Nevertheless, the stories persisted, and there was little the orphanage staff could do to curtail them.

All who came to reside in the orphanage, then, heard tell of this monster and, from that moment on, lived in fear that they, too, might become its next unwitting victim. All except one.

Elish had always been considered an exceptional child, ever since her time at the school on Malloran, where she had astounded her teachers with her confidence and scholarly aptitude. She was a gentle sort, prone to helping others before herself, and that had made her popular with her peers and the younger children alike. Like her mother – a palace guard on Malloran – Elish had always felt a deep connection to the universe around her and all the living things that inhabited it. This connection granted her a great sense of peace, and while she, too, had witnessed horrors, she refused to believe in whatever dark phantom the other children at the orphanage feared. For Elish, evil was embodied not in the form of monsters but of men, for she understood that all the terrors that had so recently blighted the galaxy were enacted at the behest of individuals and not creatures of the night.

So it was that Elish, upon coming to the orphanage on one of the Empire’s vast transport ships, became something of a steadying force to the other children, helping them cast aside their fears and, despite all they had lost, seek peace amidst the dormitories and schoolrooms of the ramshackle old building. For many months this went on, and much to the delight of the orphanage staff, talk of the phantom faltered. The children seemed altogether happier, and when the supply ships came in for the season, some of the orphans were allocated new homes with adoptive parents eager to lavish love and attention on their new charges.

It was not unusual for Elish to be awoken at night by the sound of screaming—for some of the children in the dormitory were plagued by night terrors that would wrench them from their slumber, causing them to lurch up in their beds, their faces gleaming with sweat. Never would the night staff come to comfort the poor children, so Elish would slip from her bed to take their hands, and her calm words and comforting influence would be enough to quiet their nightmares and send them readily back to sleep.

However, one night not long after her arrival, there was a great disturbance during the night, and all around Elish the alarm went up. She leapt from her bed to find the entire dormitory in disarray, and word amongst the children was that the monster had paid a visit in the small hours of the night and stolen away a young boy named Samil.

True enough, there was no sign of Samil, and search as they might, none of the staff or the children could locate him. Nor was there any evidence that a stranger had come amongst them, save for the window gently tapping in its frame, stirred by the breeze because the latch had been left undone.

After securing the window, the orphanage staff soon began ushering the children back to their beds, cooing sympathetically, shushing their cries of distress. Samil would be found in the morning, they said, or else he’d decided to run away and leave them, sneaking off into the night to make his own way in the world. Elish, though, could see that Samil’s handful of belongings had been left behind, scattered beneath his bed—and she knew he would never have left his toy heroes behind, for he would never tolerate being separated from the little hand-carved figures.

Thus, as the other children finally began to settle once again in their beds, Elish lay awake, reaching out with her senses, for she had come to recognize Samil through his connection to the universe, similar to her own. This had marked them out as different from the other children—all save perhaps one other, a young Kessurian girl named Gee’far, who also seemed to share Elish’s unusual perspective.
Sure enough, though, Elish could sense no trace of Samil anywhere within the confines of the orphanage or its grounds. Discomforted, she lay awake for the rest of the night, certain that he would not be found the following day.

The next morning a small expedition was put together from amongst the staff, which set out for the village, hoping to discover that Samil had fled the short distance to the settlement during the night. They were certain he would be found, cold and embarrassed, huddled in someone’s barn, ready to return to the orphanage for a warm bath and a rest.

As Elish had predicted, however, the team returned but a few hours later, tired and hungry, claiming that there was neither word nor trace of the boy in the village, or anywhere on the surrounding paths and roads. He had simply vanished, and there was nothing at all they could do about it.